We’ve reached the top 10, or at least half of it. This group features a pair of conference rivals, a team that has lost the element of surprise it had last season, a perennial WCHA contender and one squad that just about nobody else has in the top 10.

Leading off this section of the list are the two teams that tied for second place in the CCHA regular season and faced off for the league tournament title. Just as it did at Joe Louis Arena in March, the edge here goes to Western Michigan. In addition to the league-tournament run, the Broncos’ resume included a late-season series win against soon-to-be-Frozen Ferris State and a pair of early-season ties at Union. And, with the notable exception of All-CCHA defenseman and San Jose Sharks signee Matt Tenyson (11-13-24), just about everyone is back on the blue line. Backboned by Frank Slubowski (.911, 2.03, 17-11-4) and All-American Dan DeKeyser (5-12-17), Western should again be tough to beat in its own end. The Broncos, however, ranked 33rd nationally in scoring offense last season. The highest-scoring forwards, including Chase Balisy (13-24-37) and Dane Walters (16-13-29), have returned to help Western improve on that mark. 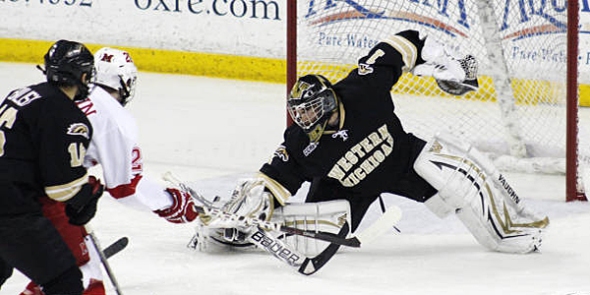 Unlike their counterparts from Kalamazoo, the Wolverines have lost both their offensive and defensive leaders from a year ago, David Wohlberg (16-17-33) up front and Shawn Hunwick (.932, 2.00, 24-12-3) in goal. What do they have back? Just five of their top six and eight of their top 10 scorers as well as every defenseman but one. Three of those eight scorers were freshmen, including scoring co-leader Alex Guptill (16-17-33). Oh, and there’s the all-star recruiting class that features first-round defenseman Jacob Trouba and second-round forward Cristoval Nieves. (I’ll call him Cristoval or “Boo,” not both.) It all adds up to a loaded lineup for a team that lost just three times in 22 games (17-3-2) before suffering consecutive losses to the Broncos at the Joe and the Cornell Big Red in the NCAA tournament.

Buoyed by a 17-4-0 midseason stretch that started with an emphatic, 7-1 defeat of Boston University, the River Hawks put together a season few saw coming after Lowell won just five games a year prior. Lowell struggled with consistency later but, with a Frozen Four berth on the line, played Union to within a goal before the Dutchmen added a final-minute empty-netter. Doug Carr (.928, 2.13, 22-10-1) was among the nation’s best between the pipes. He is back and will be supported by seven defensemen who skated in 29 or more games. The top three UML scorers also return: Riley Wetmore (14-25-39), Scott Wilson (16-22-38) and Derek Arnold (17-17-34). They are among five double-digit goal-scorers back on campus.

The DU roster was affected more than any other by early departures, including those of top scorers Drew Shore (22-31-53) and Jason Zucker (22-24-46). On the other hand, the Pioneers bring back another playmaking Shore brother, Nick (13-28-41), and add freshman Quentin. Then there’s Joey LaLeggia (11-27-38), who nearly hit the 40-point mark as a freshman defenseman (a freshman defenseman!) and, of course, the goalies. Sam Brittain (.932, 2.36, 8-4-0) was expected to be one of the country’s top netminders and put up numbers worthy of that regard—but only after missing the season’s first 25 games with an injury. Then-freshman Juho Olkinuora (.924, 2.18, 9-8-3) proved himself more than capable during Brittain’s absence, and the two alternated starts in the season’s final five games.

Sweeping your league’s regular-season and tournament crowns is a tough feat, and it’s enough to land a spot in my preseason top 10, no matter how little respect a you get elsewhere. The Falcons graduated just three skaters, but one of them was Hobey Baker finalist Tim Kirby, Atlantic Hockey’s Player of the Year and top defenseman. Jason Torf (.929, 1.73, 8-5-2) emerged as the squad’s starting goalie in midseason ranked fifth nationally in goals-against average. He allowed more than two goals only three times and posted five shutouts in just 18 appearances. Torf received two or fewer goals of support in six of his 15 decisions, but Kyle De Laurell (15-23-38), John Kruse (16-14-30), et al seek to provide more consistent support this time around.