Ladies and gentlemen, your first-place team in Hockey East, the Northeastern University Huskies. 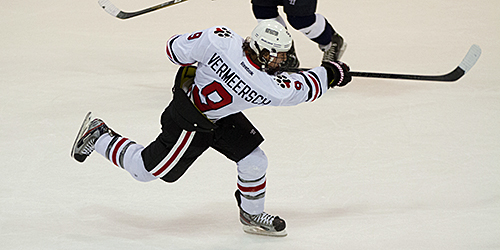 Vermeersch’s redirection set the tone early, and he tied for the team lead with five shots. • Zack Williamson photo

Merrimack made a splash last weekend by beating Union, 4-1, in its season opener. Northeastern got off to an even better start Wednesday, scoring three times in the first nine minutes, on the way to a 4-2 home defeat of the Warriors in college hockey’s first intraconference matchup of 2012-13.

• Northeastern’s first goal came in the opening minute, on a gorgeous tip into the top corner by Garrett Vermeersch after Colton Saucerman made a nifty move to find a lane for his point shot.

• Much-discussed NU newcomer Kevin Roy debuted in style with a goal and an assist. Jim Madigan put him on the ice to start the game at left wing, alongside Braden Pimm and Cody Ferriero. Roy made a nice feed to Joseph Manno on the Huskies’ second goal and later buried a fish-in-a-barrel one-timer on a power play.

• The first period was just as one-sided as the 3-0 score indicated. Northeastern held a 16-5 shots edge and played much of the frame in the MC end.

• Give the Warriors credit for battling back and outscoring Northeastern 2-0 until the Huskies added an empty-net goal. Merrimack worked its way into the game in the second period on a goal by Quinn Gould crashing the net and a bad-angle shot on the power play by Justin Mansfield. The Warriors then threw 16 shots on Chris Rawlings in the third period, but the NU senior stopped them all and finished with 32 saves.

• Northeastern was 1 for 6 on the power play. That’s not an impressive number at first glance, but I thought the Huskies moved the puck well and got some good man-advantage chances. They did look prone to the shorthanded goal, as two of Merrimack’s best scoring chances came during NU power plays, one in the first period and another at the start of the second.