How to start a hockey season

My guess is head coach Ted Donato got more than he would have dared hope for out of his Harvard men’s hockey team in the Crimson’s season opener, a 5-0 defeat of visiting Bentley Saturday at Bright Hockey Center.

I watched the first period live and finally saw the final two frames Monday. A few observations (scroll down for highlights):

• This was supposed to be a Crimson cakewalk. Then it wasn’t. It turned out we were right the first time.

Harvard, a late-starting Ivy League squad, has traditionally opened with a league game, either on equal footing against an Ivy rival or against a non-Ivy ECAC team with several games under its belt. When the 2012-13 schedule was announced, a change in scheduling philosophy appeared evident; the Crimson would host an overmatched opponent from the middle of the Atlantic Hockey pack. That would surely give Harvard a chance to work off some early-season rust.

Oops. Bentley isn’t exactly the Pittsburgh Penguins, but the Falcons entered the game as the highest-scoring team in the nation. They were coming off a nine-goal night against Alabama-Huntsville and earlier led Michigan through 23 minutes in Ann Arbor before suffering their only loss to that point, 6-3. Then there was the issue of Brett Gensler. A 50-point scorer a year ago, the star winger notched eight points in his first three games of this campaign. Bus in 750 Falcons fans and throw in Bentley’s advantage of having already played three games, including one in the unfriendly confines of Yost Arena, and this had all the makings of a trap game for Harvard.

Then the game happened. Harvard set up camp in the Bentley zone in the first period, Luke Greiner scored barely four minutes in, and the Crimson outmanned the Falcons the way one might have envisioned when first eyeing the schedule. 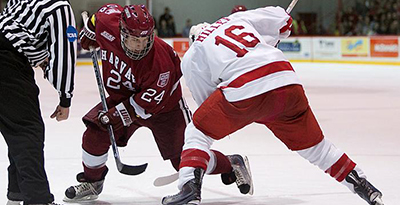 Greiner is making a habit of setting the tone with early goals. • Harvard Athletics/Patrick Shanahan photo

• Jimmy Vesey’s two-goal debut has rightfully received a great deal of attention, but the Crimson’s most notable achievement was shutting down what had been the nation’s most high-powered attack. Sometimes the best defense is a good offense, and Harvard took control early, leaving Bentley to hope for counter-attack chances. Some of those opportunities came, but Harvard goaltender Raphael Girard was excellent, particularly early in the second period. He totaled 31 saves for his first collegiate shutout (He just missed one in last year’s ECAC semifinals.) and the Crimson’s first team shutout in nearly two years.

• Oh, but Vesey! He assisted on Greiner’s goal and then scored two goals of different varieties. The first came on a power-play rush, when he beat one Falcon on the wall then dragged the puck around a sprawled-out defender before carrying it across and banking in a backhand off Bentley goalie Branden Komm for a 3-0 lead in the second period. That sort of dangling is supposed to be reserved for players who have developed the confidence of playing at least one game previously. Vesey’s second goal was of a grittier vintage. He used his big frame to fend off a defenseman and bang in the rebound of a Danny Biega point shot for a 4-0 advantage in the third.

• Harvard fans should also be encouraged to see the Crimson’s returning big guns pick up where they left off. Alex Fallstrom registered a goal and two assists to join Vesey for the lead in the national scoring race (three points per game after, you know, one game). Biega assisted on both Vesey tallies and leads all defensemen in scoring. (Again, it’s early, but Biega figures to remain among the national leaders in this category for the third straight season.) Marshall Everson logged a goal and an assist, while Patrick McNally and Colin Blackwell also made the scoresheet. Getting goals from freshmen, as Harvard did in its exhibition win against McGill, is encouraging, but a team is likely to be more comfortable relying on its proven veterans.

• After getting off to an inspired start in the first period, the Crimson lacked that killer instinct to start the second. Bentley, meanwhile, looked determined to claw back into the game. Girard made some huge stops to preserve the 2-0 lead, most notably on a Gensler breakaway and then on Tyler Krause and Andrew Gladiuk in a flurry shortly thereafter. Harvard turned the tide back in its favor at about the mid-period mark and ended up with 20 shots of its own during the second stanza.

• Harvard also got itself into trouble with penalties, committing six in the final 22 minutes. The penalty-kill unit looked good, though. Bentley came in operating at a 40-percent clip on power plays, but the Crimson killed all five of the Falcons’ chances. None of those opportunities were cut short by Bentley penalties—the Falcons did well to stay out of the box despite Harvard’s offensive pressure—and two Harvard penalties overlapped to set up a two-man disadvantage that the Crimson handled well. Harvard earned some shorthanded scoring chances, too. Blackwell and Conor Morrison nearly connected in the third period, and Kyle Criscuolo got free for a shorthanded breakaway later.

• The Crimson finished 1 for 2 on power plays to reclaim its familiar spot at the top of the national ranking in that category, but Vesey’s man-advantage goal did not come on a set power play. Harvard fans will have to wait another week for a good look at the power-play unit.

• More fun with silly, early-season statistics: Harvard leads the nation in scoring offense (tied with Denver) and defense (can’t get any better than 0.00 goals against). Vesey leads Division I in goals per game, while Biega and Fallstrom lead in assists per game. Girard and Dartmouth freshman Charles Grant, who shut out Brown Saturday, share the national leads in goals-against average and save percentage. Cornell and Dartmouth also killed all the penalties they committed on their first weekend of action to join Harvard and 26-for-26 Quinnipiac for the national lead in penalty killing.

• Apart from Greiner shooting lefthanded and Fallstrom right, the linemates scored virtually identical goals separated by about 12 minutes in the first period. Each player brought the puck down the right side of the zone, shot from around the faceoff dot and beat Komm to the far side, over the Bentley goalie’s right pad.

• The first indication is that Harvard has an awfully strong top six forwards. Greiner is fitting in nicely in the first-line center spot formerly occupied by Alex Killorn and got the scoring started early in both the exhibition win and against the Falcons. I want to call his line with Everson and Fallstrom the Line of 10,000 Lakes but think it might be too big of a stretch, considering Fallstrom is from Sweden (but played two seasons, one with Greiner, at Shattuck-St. Mary’s School). The second line features one former International Ice Hockey Federation World Junior Championship participant in Morrison (Germany, 2009) and two hopefuls for the 2013 U.S. WJC team in Blackwell and Vesey.

• Harvard’s third and fourth lines also looked competent. They combined for 16 shots on net and, obviously, did not surrender a goal. Brian Hart had a couple decent chances before getting into penalty trouble with three infractions, and Cruscuolo nearly got his first goal on his late break. The defensive corps? See the note above about shutting out the nation’s top scoring offense.

• The Crimson now jumps into ECAC and Ivy play, hosting Brown and Yale this weekend. Parts of Saturday’s game, especially in the first half of the second period, had the feel of some Harvard-Brown games of years past, when the Crimson looked like the better team but the Bears forced a somewhat sloppy, end-to-end game and hung around with some opportunistic counter-attacking. Now Brown comes to Bright, and both teams should know what to expect after facing off in a preseason scrimmage. The Harvard-Yale rivalry should be as charged as ever following last season’s wild regular-season split and playoff series.

• A 5-0 loss isn’t how Bentley envisioned opening a five-game road stretch. Up next is a tough set at Robert Morris, which owns wins at Quinnipiac and RIT. That series should provide more insight into whether the real Falcons squad is the one that showed up at Yost (and outscored its other two pre-Harvard opponents 16-3) or the one who made the short trip to Bright (leaving its scoring touch back in Waltham).